To see the book on Amazon, click on the cover.

When handyman Ham Jeffries buys a set of books at auction from a recently deceased lawyer’s estate, he has no idea what he’s gotten himself into. Soon he and his uncle, the local sheriff, start digging into the case to determine if it was an accident or just plain old murder, and in doing so, they uncover something that rattles the entire town of Hemlock, North Carolina. The clock is ticking for the two men to unmask the murderer before it’s too late!

Weddings Can Be Murder

When Colton Stone’s niece gets married, things are stressful enough, but when a guard at the inn where the wedding is taking place is murdered and a rare emerald is stolen in the process, things get even dicier. To make matters worse, everyone at the wedding is a suspect, including the bride herself. Things get even more complicated when Colton’s old flame shows up in his life again, making him deal with the earlier loss of his wife, Allison. She’s not completely gone, though. Colton still talks to her, and she responds. With everything going on, Colton must keep his head and find the jewel as well as the real killer before everyone he knows and everything he cares about is threatened.

To see the book on Amazon, click on the cover.

Innkeeper Alex Winston owns Hatteras West, an exact replica of the Cape Hatteras Lighthouse nestled in the foothills of the Blue Ridge Mountains. When one of Alex’s guests is found dead at the top of the lighthouse, at first no one is sure what killed him. But a series of ‘accidents’ soon after show that someone is targeting Alex’s Inn for mayhem, trying to do more than just put him out of business.

The Golden Days Crafts Fair comes to Hatteras West, and Alex couldn’t be more excited. His new maid, Elise Danton, is working out better than he could have hoped, and things are finally looking up for Alex. That is until the town’s blacksmith is murdered at the fair, and Alex must solve the murder to clear the name of his inn. 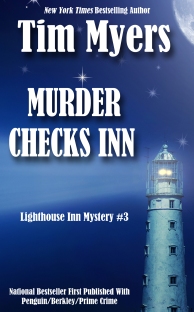 The Hatteras West Inn is the perfect getaway, a replica of the Hatteras West Lighthouse tucked into the foothills of the Blue Ridge Mountains. But when the Trask family comes to sort out their father’s will, they bring their troubles with them. When Alex’s uncle is murdered, it ties directly into the squabbling family, and Alex is determined to find out who killed his uncle.

Alex is thrilled when his best friend, Mor Pendleton, is engaged to Emma Sturbridge. He and his maid, and budding love interest, Elise Danton, are already talking about holding the wedding at the base of the Hatteras West Lighthouse, but those plans are ruined when Emma’s ex husband is found murdered on the grounds of the inn.

Innkeeper Alex Winston is happy to get the Carolina Rhapsody Emerald to display at the Hatteras West Inn, but when he hears about the curse on the jewel, he begins to have doubts. The show is nearly over when the precious emerald is stolen, and the man hired to guard it is murdered.

Alex and Elise swap lighthouse inns and go the Outer Banks to run the Cape Kidd lighthouse inn. While they are there, murder pays a visit, and as the innkeepers and guests are isolated from the rest of the world by a storm, they must solve the murder, or be the next victims.
Includes a special afterword on how the Lighthouse Inn books came to be!

Alex and Elise are finally getting married! At least they think so. But when a body of one of their guests is found murdered on the day of their wedding, they must find the killer before they can say I do!

Alex and Elise go away to Bear Creek Lodge for their honeymoon, but instead of a relaxing time, they quickly discover that someone died in the room next to them recently. Was it suicide, as the police suspect, or murder, as the newlyweds begin to believe? Their investigation covers the guests at the lodge as well as a new array of eclectic townsfolk, and they soon discover that there is a great deal more going on at Bear Creek than they ever would have suspected.

Harrison Black is stunned when he learns that his Great Aunt Belle has been murdered. The shock runs even deeper when an attorney informs him that he’s inherited At Wick’s End, a candleshop housed in the River’s Edge complex. As he learns the art of candlemaking, Harrison also tries his hand at solving her murder.

When the power goes out at the River’s Edge complex, candlemaker and landlord Harrison Black starts searching for the reason. When he stumbles upon the body of potter Araron Gaskin, he is left with more than a blown fuse to worry about. 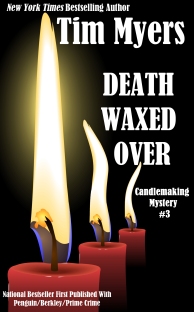 During the Founder’s Day celebration in New Conover, North Carolina, candlemaker Harrison Black has a run-in with his new rival, Gretel Barnett. When the woman is soon murdered, a hysterical witness claims she saw Harrison do it! He must find the real killer, or lose everything he’s come to love.

A Flicker of Doubt

Candlemaker Harrison Black is out on the Gunpowder River when his kayak bumps into something he thinks is a log. When Harrison discovers the grim truth that it’s a body, he is shocked even more when he realizes that it is someone he knows all too well.

Waxing Moon is a short story from the world of my Candlemaking Mystery series, first published in Berkley Prime Crime’s MURDER MOST CRAFTY anthology in 2005.

Candles and crime go hand-in-hand for Harrison Black, owner of the candleshop At Wick’s End. When his friend and tenant Millie Nelson’s cafe, The Crocked Pot, is robbed during a wedding rehearsal dinner, it’s up to Alex to uncover the thief and shed light on who committed the crime.

Ben Perkins is the family and business troubleshooter for Where There’s Soap, a family-owned boutique and small scale production shop the creates and sells all things Soap related. When one of the store’s suppliers is doused with Lye and dies, Ben soon finds out that one of his sisters was dating the man, and worse yet, it had just ended badly. Ben must deal with his ex-girlfriend and police officer Molly Wilkes, as well as a new woman in his life as he tries to solve the supplier’s murder.

A Pour Way To Dye 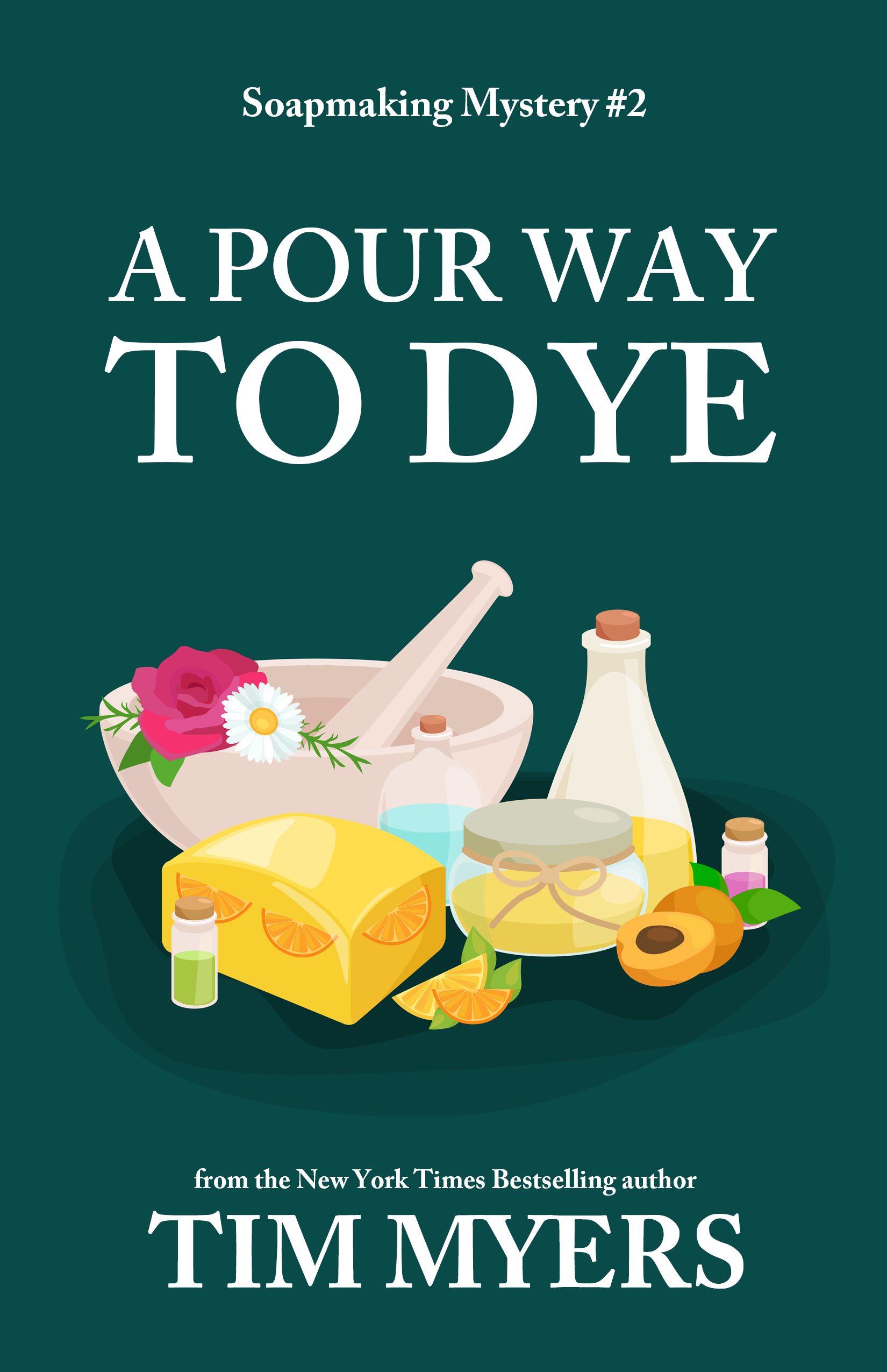 Ben’s family has owned Where There’s Soap, their boutique and production facility, for what seems like forever. When a nasty neighbor puts up a fence on their land, he claims it belongs to him, and he has the papers to prove it. As Ben digs into this problem, an even bigger one comes along when the neighbor in question is found murdered right next door!

A Mold for Murder

Ben’s family soapmaking business, Where There’s Soap, risks a lot when they decide to hold the first annual Soap Celebration. He even invites renowned author and soapmaker Contessa New Berne, who turns out to be every bit the drama queen he was led to expect. As the crowd waits impatiently for her to appear at the event, Ben goes in search of her, only to find that she’s been murdered in the back room while waiting to go on!

When Cusp breaks out of prison, there are two things he must do; see his daughter, and kill the man who put him behind bars, Parrick Wolf. As a snowstorm takes over the sleepy little town of Alder Springs, Wolf battles the elements as well as the killer, and must search for his girlfriend’s missing daughter along the way.

Raised at the Poison Ivy Orphanage, young Griffin has nearly lost hope when a stranger comes through with magic crystals that focus powers in the young.  The magician Sharidan is starting a new school for wizards who don’t show their true abilities until they are exposed to the crystals.  Griffin, along with new friends Luke and Callie discover that magic has its own set of problems!

Did You Solve The Crime? Vol. 1

Did You Solve the Crime?
Work alongside the detectives as they try to solve these flash fiction crimes! See if your solution matches theirs, and learn what really happened in the end!

For information about the availability of all rights, please contact the publisher at timothylmyers@hotmail.com